A fellow DJ I have performed with about eleventy bazillion times over the years recently dug up some evidence that my handwriting has been terrible since at least 1998. The example I provided was a partial play list from an old set from that second to last year of the 20th century. 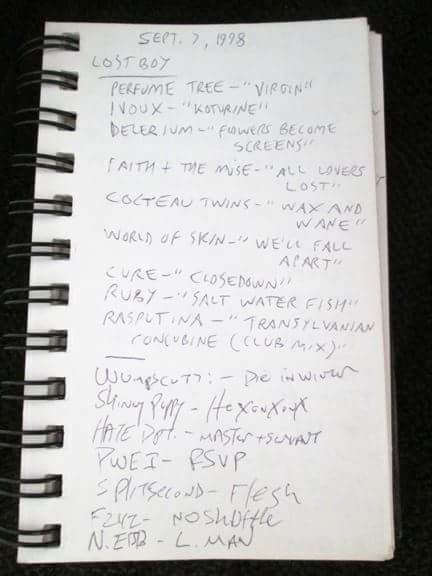 It’s fascinating for me to see this since it wasn’t in my possession and I hadn’t seen it since I wrote it. If you can even call that writing, and I would understand if you did not. I was notoriously bad at keeping a record of what I would play on any given night, often to the chagrin of my fellow DJs, but on occasion I would scribble things down so we could all get along. Many DJs I know would keep very good records and post the set lists online, and still do today. Others would worry that making what they spun public would then risk themselves becoming victims of creative vampirism and have their good ideas in the grubby hands of some nefarious imitator. 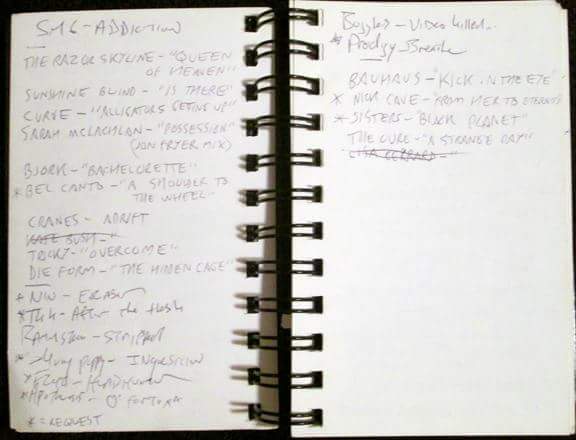 Yeah, we played The Buggles along side Rammstein, it all made sense at the time.

I fell somewhere in between. I would openly share what I was playing, but had a hard time finding any reason to write anything down, since I was pretty much only concerned with what was happening in front of me. If some joker wanted to gank my hottest tacks and make a go of it, that didn’t really bother me since I was generally focused on mixing things up (no pun) and found the idea of repetition in my sets downright tedious. Don’t get me wrong, I had regular favorites and I definitely had tracks I absolutely played to death, especially Sick/Asp/Fuck by Pigface, which I was forced to publicly swear to never play again. I did, there was a Conga Line, life is complicated.

The main point was that if I’m playing something in public, especially music I didn’t create, it’s not like I can have any claim to it. If another DJ was bringing “it” more than I was, then my particular “it” needed to be more brought and I was the only “it” bringer to have any responsibility for doing any of the bringing. Good for them, keeping me on my toes. In all my years, I can think of only one or two moments where I felt that twinge of feeling like someone was copying what I was doing, which is a rotten feeling if you don’t know, but I usually just found something new and better, moved on. Seemed like the only sensible thing to do.

OK, there was this ONE time when I played some oddball set at ManRay in between bands and made a custom CD with a few tracks I wanted to keep all in one place. One of those tracks was a bizarre song I had transferred (the hard way) from vinyl to my computer, then burned along with the other stuff. After my set I somehow misplaced the CD, which in no way was a consequence of doing like five mind erasers that night.

About a week later, I’m in the basement and I hear a very distinctive beat that surprises me as I realize it’s THAT song. Keep in mind, this a rare, very hard to obtain song I found quite randomly and put some effort into transferring to CD. The DJ playing it had been working with me the night I had lost it and now here it is, thumping it through the floor and getting me all riled up. That no good, lousy, CD pilfering sack of…

Well, I don’t actually know he took  my CD. He could have found it just like I did and found the appeal of it, just like I did. A month later I had lost interest in playing it anyway and had moved on. The song wasn’t mine, playing it didn’t belong to me and nobody really cared except me. Life lessons form the basement of ManRay, who would have thought! Actually, a lot of people probably learned some major life lessons down there, but I’m willing to bet many of them were of a very different nature. If you catch my meaning. Ew.